High-Availability SMTP with UCARP on Debian

At customer request, we're going to start offering outbound SMTP service to Postica customers. Doing so requires a much greater guarantee of availability than is required when only accepting mail from other MTAs. MTAs are able to use multiple MX records when attempting to deliver mail, and will queue mail if none of the MX hosts are available. MUAs, on the other hand, can generally only be configured with a single hostname to use as the SMTP server for outbound mail, and tend to show the user an unpleasant error message if there is a problem connecting to the SMTP server.

To provide high-availability, load-balanced SMTP service, I decided to use round-robin DNS in combination with CARP, the UCARP implementation specifically. CARP is a protocol for supporting failover of an IP address, very similar to VRRP.

I installed the Debian ucarp package on two servers. Each server is the preferred server for one ucarp-managed IP address and the backup for the other; smtp.postica.net points to both addresses. I also installed the iputils-arping package which is used to send gratuitous arps when the IP address moves to a new server thus causing the MAC address to change. Note that the arping program in the iputils-arping package is different than the one in the arping package.

I added two up options to /etc/network/interfaces on each server to start one ucarp process for each IP address when the physical interface to which the ucarp addresses are bound is brought up.

The interfaces file is essentially the same on the second server, but the values of -k arguments, the advertisement skew which determines priority, are swapped. If you were running ucarp on multiple interfaces, you probably wouldn't want to kill all ucarp processes when bringing an interface down; you might want to use start-stop-daemon with --make-pidfile and --background instead of using ucarp's --daemonize option.

The --upscript and --downscript arguments tell ucarp what scripts to run when taking over or releasing an IP address, respectively. Here's an example of each:

In theory, it should only be necessary to send a single (or maybe a couple) gratuitous arp. I had a problem when using vrrpd, though, in which the backup host would briefly become the master, the arp table on the router would get updated with the MAC address of the new master, then it would go back to being backup. During this period, the other host would think it was the master the entire time, and so would not send any arp updates making the IP address unreachable until the router's arp table was updated. I don't know if this could occur using CARP, but I prefer to play it safe and have the master continue to send unsolicited arps by using start-stop-daemon to spawn a long-running arping process.

In summary, round-robin DNS is used to balance the load across the two servers, and in the event that one of the servers goes down, both IP addresses will be handled by a single server.

On Saturday, Denisa and I bought our first pieces of art. I took her down to Scala Galleria to show her Carrie Graber's stuff that I liked. She wasn't quite as impressed as I was, but she thought some of pieces were pretty good.

We ended up buying two small, 9x12 pieces, one original and one print. The original is Room Full of Blues. 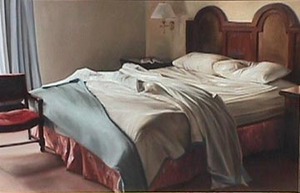 The print is The Letter. 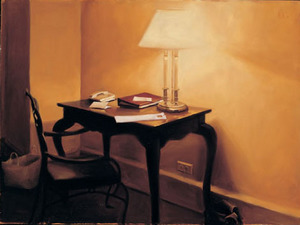 Does Russell Get Frugality?

Russell Beattie is a "work[er] at Yahoo! focusing on new mobile products," but seems *amazed* that somebody who works for a living might find that spending $500 on a mobile phone is extravagant. My goodness!

In his latest "Online notebook" post about Leslie Katz's post about Jimmy Buffet's lost Sony Ericsson mobile, Russell breathlessly recounts Leslie's "snarkiness and ignorance" as she "breathlessly recounts that a bus boy who found the phone may have crank called Bill Clinton, 'whose number was stored in the $500 phone's directory,' and warns there might be more phone calls coming since, 'Apparently, the fancy phone's memory card with the names, numbers and some addresses' is still missing." Emphasis mine. Double emphasis his.

Astounding. For some reason this rubbed me the wrong way - just the snarkiness and ignorance of it. Could someone at Yahoo please give this man a decent financial planner and tell him to get a clue? Thanks.

Intelligent Life, a new magazine from the publishers of The Economist, has a story about how much of the wine produced in California is "watered back", i.e. diluted with water. Apparently, this is done to keep alcohol content down or to make sure that fermentation occurs if there is too much sugar in the grapes. I'm no wine connoisseur, but I'd be surprised if very many wine drinkers were aware of this.

…French towns and villages are a great deal more picturesque than anything that northern California can offer. Calistoga and Yountville are not exactly Beaune and Châteauneuf-du-Pape. But for the winemaker the obvious difference is the weather: California has longer and warmer sunshine—which means that the fully ripened grapes may well produce a wine with a bit too much alcohol for comfort (too much, also, for the bottom line, since wine and liquor are taxed according to their alcohol level).

One obvious solution would be to pick the grapes earlier, except that that would be at the cost of the "full-bodied" flavour and "big" character of the typical Californian wine. Hence a preference for the other obvious solution: adding water during the fermentation process. At which point, everyone gets a little coy, even a trifle alarmed. Witness the concern of a spokeswoman for California's Wine Institute. "How did you hear about this?" she demanded. "This is a long, long story—it's kind of a stylistic thing."

In addition to not shuffling, my iPod Shuffle started having some problems being detected upon plugging it into a usb port. I tried multiple usb ports on multiple computers with which I had previously used the Shuffle, so I concluded that the problem must be with the iPod.

Friday afternoon, I opened a service request with Apple online. I was told they would send out a replacement with a postage-paid envelope in which I could send back the defective iPod. There would be no cost, but they took my credit card number in case I didn't send back the broken one.

My new Shuffle arrived this morning (Monday) around 10 am. That's a pretty amazing response time. I plugged the new one in, initialized it with gtkpod, and copied over some mp3's. The new one even works in shuffle mode. I put the old one back in the envelope and scheduled a pickup with DHL, who picked it up a couple hours later. I'm happy.

In other Apple news, new Macs will have Intel CPU's.

However, Schiller said the company does not plan to let people run Mac OS X on other computer makers' hardware. "We will not allow running Mac OS X on anything other than an Apple Mac," he said.

Nevermind, there's not much of a story here.

Steve Friedl has long maintained the "No Dashes Or Spaces" Hall of Shame which catalogs web sites that require visitors to enter their credit card number without spaces as dashes. As he points out, it's trivial to strip out the extraneous characters server-side so there's no reason to have this stupid restriction in web applications.

When somebody is making a purchase online with a credit card, they simply need to copy the card number (hopefully, without stripping out the whitespace) and the expiration date into a form. The customer shouldn't need to mentally convert the format of the expiration date on the card to the format required on the web site. Additionally, there's no reason to use pull-downs to enter the expiration date. A small text box is the perfect format for entering a 5 digit string.

I suggest the following regex be used to validate expiration dates:
^((0?[1-9])|(1[0-2]))[/-]?(2[01])?\d\d$
This is probably even more liberal than necessary. It allows a one- or two-digit month and a two- or four-digit year, optionally separated by either a slash or a dash. Here's a PHP function to validate such a date string and normalize it to MM/YYYY:

It will also verify that the expiration date is in the future, as of the current date or an optional date passed as a second parameter. If the third parameter is true, dates in the past will not be rejected.

I went down to the Scala Galleria on Montana in Santa Monica yesterday to check out their art by Carrie Graber. They had about 10 pieces of hers including a couple small original paintings and a number of giclees on canvas. Her paintings are amazing.

I had never checked out that area of Santa Monica before, so I wandered down Montana towards the beach. It's mostly little boutiques, but there are also a number of coffee cafes and restaurants. I stopped at the bluffs and read for bit. On the way back, I stopped in a little pub called Father's Office. From the "Beer" sign outside, I thought it would be a dive, but it was actually a trendy little place.

It reminds me a bit of City Pub in Redwood City. They have 36 beers on tap, mostly California microbrews and a few international beers. I had a great IPA, Bear Republic Racer 5, and an even hoppier double IPA, Russian River Brewing's Pliny the Elder. Both were fantastic beers. Surprisingly, they had Greene King Abbot Ale. I've never seen Greene King in the states. I asked if they ever get the IPA, which is probably my favorite English beer, but the manager said that it doesn't travel well, which is kind of weird considering IPA's were originally made for export.

The only disappointment was the food. They have an absurd policy of "No substitutions, modification, alterations or deletions. Yes, really." When did beer snobs become food snobs? Since I couldn't get a burger without cheese, I ordered some chorizo which wasn't very good.

Novafoam Mattress Holding Up to the Heat

Memory foam is designed to soften based on your body temperature. I was a bit worried that my Novafoam mattress might start to feel like a waterbed as the weather got hotter. (The Sleep Number salesguy told me as much.) Summer has started here in the valley, and so far, I'm still sleeping comfortably.

It looks like we're one step closer to being able to short real estate. There's a company called HedgeStreet (Via The Big Picture) which allows trading futures on housing prices and mortgage rates. It's not quite the same as shorting a house as there's no underlying asset being bought and sold, nor even an option on an underlying asset; rather, it's basically a bet on which way prices (or rates) will go.

The web site is terribly slow so I haven't read all of the details. If it gets significant volume, it may become a valuable tool for predicting future prices, as markets seem to be pretty good at this type of thing.

of Northern Trust's Economic Research to include their International Comments.

Also, I don't think I mentioned it when I first set it up, but I also have a feed

of the Prudent Bear news.

The Housing Bubble in Pictures 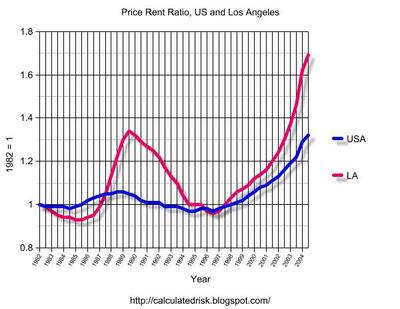 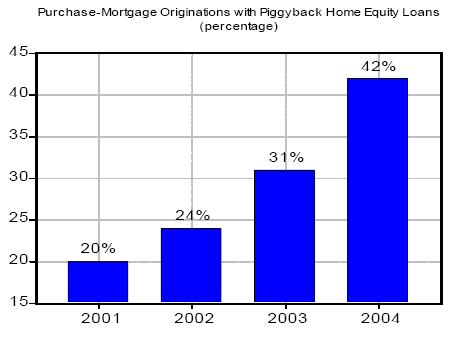 From The Miami Herald