Salesforce applications can sometimes be difficult to debug. The debug log often has the information you need, but finding it isn't always easy.

For example, in a recent project, I needed to figure out why performing an action from a Visualforce page was causing more SOQL queries than expected, generating warning emails as we neared the governor limit. This was a large application that had been under development for about eight years; many different developers had been involved in various phases of its development.

As with many Salesforce applications that have been through many phases of development, it wasn't obvious how multiple triggers, workflow rules, and Process Builder flows were interrelated.

It was easy enough to figure out which SOQL queries were running multiple times by grepping the debug log, but it wasn't obvious why the method containing the query was being called repeatedly.

In researching ways to analyze call paths, I found Brendan Gregg's work on flame graphs, which visualizes call stacks with stacked bar charts. (You might also be familiar with Chrome's flame charts.)

Visualizing the call path through stacked bar charts turned out to be a good way to make sense of the Salesforce debug log.

Here's an example based on the debug log generated from running one of the tests included in the Declarative Lookup Rollup Summaries tool.

You can drill in by clicking on a statement, or click on Search to highlight statements that match a string.

I'd love to get some feedback from other Salesforce developers. Try out Apex Flame, and let me know what you think.

As for the debugging issue that initially inspired the creation of Apex Flame, it turned out to be the combination of a trigger that wasn't checking whether the old and new values of a field were different, causing it to run code unnecessarily, combined with a workflow rule that was causing the trigger to be called multiple times.

Another recent case in which it turned out to be helpful was in troubleshooting a process builder flow that was failing to update child records as expected. The flow assumed that if the parent record is new (ISNEW()) that it didn't have child records. It turns out this isn't necessarily true because a trigger on the parent object can create child records, and the flow runs after the after insert trigger. The order of execution is documented, but visualizing the execution order made it clear what was causing the unexpected behavior.

Based on my previous Force.com app for managing Salesforce Cases on a Kanban board, I've built Kanban for Salesforce, a project management tool on the Force.com platform. It uses a custom object for cards so it's not tied to an existing Salesforce native object. Cards can be organizated into sprints.

I've built a proper website for it, and there's an online demo. Check it out at octoberswimmer.com. 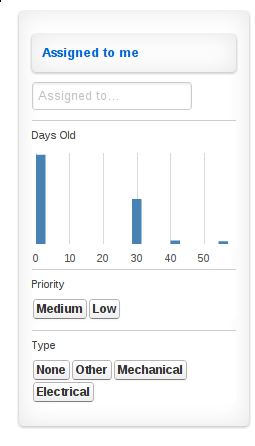 I've updated my kanban tool for Salesforce Cases to allow filtering Cases by multiple criteria. In addition to Owner, you can now filter by the age of the Case, the Priority, and the Type.

Install CaseBoard Install to a sandbox

Kanban Board for Managing Salesforce Cases 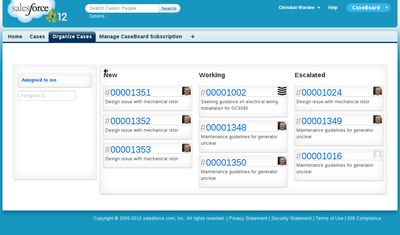 I've started building a tool to manage Salesforce Cases on a kanban board. Each case is a card, and each Status picklist value is a list on which the cases can be organized. You can drag cases around to prioritize and track progression.

The lists are organized left-to-right in the same order that the picklist values are arranged top-to-bottom. There's a custom setting to treat the first picklist value, typically "New", as your backlog. The backlog is hidden by default, and can be shown by clicking the arrow on the top left.

If you use Salesforce Cases, please try it out. I would love to get some feedback and suggestions for features. It's still early in development, but I was able to get off to a good start on the front-end by adapting code from huboard, a great tool for managing github tickets.

Install CaseBoard Install to a sandbox

This is also my first time trying to build my own commercial application on the force.com platform. Thoughts from anyone who has sold applications on the AppExchange would also be appreciated.

Static Resources in Salesforce are often zip files containing multiple files. If you're keeping static resource under version control using git, here's how to get useful diffs for them whether they are zip files or single text files.

Create a shell script which will identify whether a file is a zip file or not. If so, it should unzip the contents to stdout; otherwise, it should just output the contents of the file. I called it resource-conv.

Tell git to use this conversion utility for a new "resource" diff driver:

Tell your repo that .resource files should use the "resource" diff driver by adding the following to your .gitattributes:

Configuring Salesforce Chatter with an account in an org that doesn't have Chatter enabled results in an unusable app. Upon start-up, it authenticates against the org, shows an error, "Chatter is not enabled for this organization", then exits.

To restore Chatter to a state where it prompts for the org type, Default or Sandbox, I had to remove the Encrypted Local Store used by AIR apps.

Saleforce uses 15-character IDs as primary keys for every record. When retrieving an ID over the API, 18-character case-insensitive IDs are returned. Generally, this doesn't cause any problems because the 18-character version can be used anywhere the 15-character one is. One problem arises though when you are storing IDs in a text field. In this case, you may need to convert a 15-character ID into its 18-character version. Salesforce provides a description of how to perform this conversion.

Here is a PHP implementation of the algorithm.