The Perfect Substitute points us to this tip on how to get free gas. Not to be outdone by the senators who want to send voters a bribe in the form of a $100 check representing a gas tax rebate (uhm, why not just cut or eliminate the tax in the first place?), the counties of Orange and Los Angeles in Southern California will give you a free gallon of gas if you run out on the freeway. I guess they need somewhere to spend all the extra cash they've been pulling in from property taxes.

To cover my state and federal taxes for last year and my estimated payments for this year, as well as my IRA contribution, I scheduled a transfer from my ING Direct account to my regular checking account for Monday. I actually had enough in there to cover the taxes, but not the IRA contribution, so I wrote a check for the contribution and mailed it on Monday so I could be pretty confident that the ING transfer would be complete before the check was presented for settlement. Despite the fact that the government was going to be sucking a bunch of money out of my account, I was relieved to have my taxes done and all the payments worked out.

One small problem: I accidentally scheduled the transfer from my checking account to ING instead of the other way around, so on Monday my checking account was emptied resulting in the rejection of three of the tax withdrawals as well as a scheduled credit card payment, generating four NSF fees, and my taxes not being paid on time.

I called ING to schedule the transfer of the mistaken withdrawal as well as the original deposit I meant to make, and my other bank to ask that they honor payments presented in the mean time. I hope that my IRA contribution check clears or I may have to file an ammended tax return without the contribution and pay more taxes plus penalties. What a disaster.

How to Concatenate PDFs

Immigration, and illegal immigration in particular, is a hot topic in the US Congress and among the population in general. Mark Trahant, in an editorial in the Seattle Post-Intelligencer, argues that immigration to the United States is nothing new, and that the same issues which the country now faces have endured since the founding of the country. These concerns are: the failure of new immigrants to assimilate; the fact the new immigrants are entering the country illegally; and that Americans' jobs are at risk because of immigration.

Although there are parallels to the past, it is undeniable that immigration is now out of control in this country. Ninety percent of Americans consider illegal immigration to be a problem.

These immigrants are bringing their foreign culture with them. The immigrants that come from Mexico and Central America have two to three times the number of children as native Americans. These children must then be educated at taxpayer expense. The US cannot afford to feed and educate the world's destitute masses. We must stop illegal immigration now. If we keep the current immigration policies in place or further expand the decriminalization of illegal immigration by granting amnesty to those who have already entered the country illegally, the US economy will deteriorate until it reaches parity with Mexico's.

In addition to the economic war US taxpayers are fighting against the onslaught of illegal aliens, the United States is currently engaged in a war on terror. Mexico may claim to be an ally of the US, but the lack of Mexican troops in Iraq shows that Mexican values are clearly not aligned with America's. Can we really afford to let our enemies into our country?

Just as during the period following World War I, we must again stand vigilant against those that wish to enter our country illegally. Those that spit in the face of the laws of our sovereign nation must be treated like the criminals they are. If one enters this country by trespass, they are criminals by definition. With no respect for the law, they will surely have no qualms about dealing drugs to our children and mugging our elderly.

It has been argued that the immigrants come here to do the work that Americans will not do. In Los Angeles, move than 30% of students drop out of high school. Certainly, these uneducated natives will do the low-skilled work that it is claimed only foreigners will do. These Americans need to have jobs to support their families. How will they be able to survive with immigrants taking their jobs and driving down the wages in those few jobs Americans do find?

Globalization may be improving the standard of living for the world's poor, but we must not allow it to do so at the expense of good, honest Americans.

The above essay is an assignment for my philosophy class in which I am supposed to use only bad arguments. I tried to avoid good arguments while, at the same time, not letting my bad arguments become too absurd. Try to find the following common fallacies of reasoning:

While working on a paper on immigration for a Model UN-type project, I discovered a great program called kdissert. It's a mind-mapping tool designed to help write papers and presentations. A mind map is similar to an outline, but ideas are laid out radially.

I usually use vimoutliner to organize my thoughts for a paper, but one problem I have when using vimoutliner is getting the text into OpenOffice for final editing. I generally convert to docbook, then to xhtml which I import into OpenOffice. Unfortunately, line breaks within the original text are preserved so the text doesn't wrap properly in OpenOffice. I'm sure I could fix this by either preprocessing the text prior to conversion to docbook or processing the docbook text, but I though I'd try something new.

Kdissert can export directly to OpenOffice and LaTeX. I found a small bug in the OpenOffice generator in which URLs to linked documents are not properly encoded, but the author of kdissert, Thomas Nagy, quickly addressed it. A PNG of the entire mind map can also be generated. 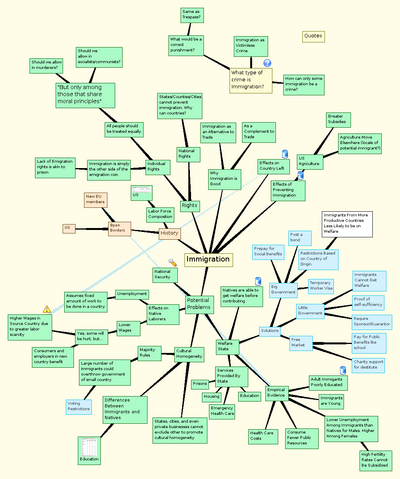 Unfortunately, I never finished my immigration paper; I couldn't figure out a way to reconcile my position with that of the US government which I was supposed to be representing in the simulation.