I bought a BlackBerry 7290 a couple weeks ago. I mainly wanted it so I could keep tabs on my email, and ssh into servers when I'm away from my desk. Being a BlackBerry, it handles email pretty well, of course. After logging into T-Mobile's web site, it only took a minute or two to add my IMAP account. I just had to enter my email address and password, and it figured out the username, server, and that it should connect to the IMAPS port.

The BlackBerry service frequently logs into my IMAP server and delivers new messages to the handheld (RIM lingo for their phone/PDA devices). Deleting a message on the handheld can optionally delete it on the IMAP server. So far, I've had one incident in which the BlackBerry pulled in a few old messages as new. I'm not sure how it decided to pull in these three or four messages from my inbox of 8900 messages (yeah, I'm do for a cleaning). The BlackBerry mail software is not a full-fledged IMAP client. It's not possible to retrieve mail from folders other than the INBOX, nor even get to old messages already in the INBOX. I may look for a better third-party IMAP client.

Getting an SSH client to work on the BlackBerry was much more frustrating. It supports MIDP, which allows small Java applications to be installed. So immediately after getting the device, I installed midpssh, an open source SSH client. It was unable to connect to any ssh servers, though. Digging through the BlackBerry forums, I tried changing my APN settings, using different gateways and experimenting with entering my username and password vs leaving it blank. Nothing worked. I spent about five hours over the course of four days on the phone with T-Mobile support. I tried using Idokorro SSH, a commercial SSH client, with the same results. I was pretty sure that either something was wrong with my handheld or that my account hadn't been provisioned properly.

T-Mobile won't provide support for third-party applications, even ones provided on their co-branded Handango site, but the third or fourth BlackBerry support guy I talked to suggested that I could set up my BlackBerry as a modem to verify that it is working properly, and that they would be able to help troubleshoot if it wasn't.

So I set up the device as a modem in Windows within VMWare since there's absolutely no support for BlackBerrys under Linux, and I had the same problems. I was able to authenticate and bring up a PPP connection, but any type of network connections other than DNS queries failed. After another hour or so on the phone with T-Mobile, I was told someone would call me back on the next business day. Waiting for the call back, I tried once again to use the device as a modem, and what do you know, it worked. I started up midpssh, and it worked too. I'm sure my account just hadn't been set up properly despite having asked T-Mobile repeatedly to verify that it had been.

It's definitely not speedy to work in an interactive session over GPRS, but it'll do in a pinch.

The BlackBerry comes with a well-featured web browser. It's a full HTML browser which supports JavaScript and CSS. It even supports flash and svg, though I have those disabled.

Another great third-party application is Google's Local for mobile, which provides access to Google Maps (aka Google Local) from a custom J2ME application. I went to visit a friend in Santa Barbara last weekend and I didn't have to print out a Google Map like I usually do. You just step through each turn on the handheld. I used to use Google SMS from my old phone to find a nearby book store or the phone number of a restaurant, but this is much more useful.

I was actually planning on getting the 7105t, which has a normal phone form factor, but having tried to type on the 7105t's 20-key keypad, I'm glad I went for the full keyboard. 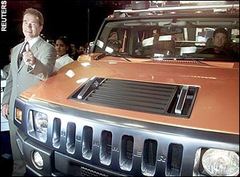 I got stuck in traffic on Friday because Schwarzenegger was standing on a pile of rocks next to the 405 in front of a bunch of TV cameras. He was causing traffic while announcing funding for a carpool lane.

I can finally make good coffee at home. Over the past year, I've gone from being a one-latte-a-week coffee drinker to a daily consumer. The problem is that I have been unable to make a decent cup of coffee. I have a one-cup french press and a moka. I can't get a good cup of coffee out of either. Lately, I've been using instant coffee which isn't too good, but at least I can't ruin it.

So, I finally got a proper coffee machine, a DeLonghi espresso maker. I bought some pre-ground espresso from Caffe Latte on Wilshire since I only have a whirling blade grinder, which I've read is not recommended for espresso. I'll try out the grinder later, but I wanted to make sure that my first cup of coffee was delicious, and it was. The machine also came with some Illy pods, but I haven't tried them out yet.

Now that lattes don't cost $3, I want to drink them all day, and I'm worried about excessive caffeine intake. The problems of living in modern society...

In Italy, "abuse of popular credulity" is a crime. A case has been brought against a Catholic priest for claiming that Jesus Christ was an actual person, and the judge has ordered the priest to appear in court to prove his claim.

I don't know how courts work in Italy, but in the US, witnesses are asked to swear on the Bible. Doesn't doing so assume that the text within is factual? I don't think they let you bring in your own books

I have the fantasy of opening up a little cafe, apparently like many other people. Michael Idov has already done it and documented the money-losing venture at Slate.

He goes on to describe how he lost money on every croissant sold, and how he and his wife end up working "$8-per-hour jobs slinging coffee" before going bankrupt.

The European cafes that Michael tried to emulate probably don't $4,500/month rents to pay, because I don't think they get the to-go business that makes Starbucks so profitable.