I eat at Chipotle probably twice a week. A couple days ago, I dropped my business card in the fishbowl next to the register. Today, I got a call from Shabby at Chipotle, telling me that I had won 10 free burritos. Unfortunately, it's 10 free burritos to be ordered for a single lunch, to feed an office of people.

I work from home. I don't think I even know 10 people who live in Northridge. Anybody want to join me for lunch next week?

Using udev and autofs Under Debian with an iPod and Camera

Last week, I set up udev on my desktop machine. udev is the Linux 2.6 way of dynamically managing the /dev directory. It populates /dev only with devices that actually exist, and adds and removes entries as devices are plugged in or removed from the system. In addition, it allows the entries in /dev to be named consistently.

Consistent naming of /dev entries solves a big problem with using USB devices under Linux. Many USB devices use the usb-storage module, appearing as SCSI devices. The problem is that the name the kernel gives to the devices depends on the order in which they are plugged into the system.

For example, I might plug my iPod Shuffle into my computer, and the kernel would name it /dev/sdd. Then I plug in my camera, and the kernel would call it sde. But if I had plugged them in in the opposite order, their names would have been reversed. This makes it difficult to mount them without first checking dmesg to find out what the device has been named.

udev solves this problem by allowing me to tell it what to name a device when it is detected. udev uses information from sysfs to determine which device is plugged in. I have configured udev to name a device whose vendor attribute is "Apple" /dev/ipod and a device whose vendor is "Pentax" /dev/camera. The Debian udev packages put the udev rules in /etc/udev/rules.d. So I created /etc/udev/rules.d/50-custom.rules which contains:
BUS=="scsi", SYSFS{vendor}=="Pentax", NAME{all_partitions}="camera", GROUP="plugdev"
BUS=="scsi", SYSFS{vendor}=="Apple", NAME{all_partitions}="ipod", GROUP="plugdev"

The NAME{all_partitions} part tells udev to create device entries for all of the block device's partitions, so it will create /dev/ipod[1-15] and /dev/camera[1-15], allowing me to mount the FAT partitions on each. See Daniel Drake's guide to writing udev rules for more information on configuring udev.

Now that my iPod and camera are consistently named, I'd like to be able to access them from within gtkpod and digikam, the applications I use to manage the files on them, respectively, without having to manually mount them. While gtkpod has an option to mount the iPod, digikam does not. I have my camera set up in digikam as a generic USB mass storage device, for which you just need to configure a directory to browse.

Following the debian-administration.org tutorial, I set up autofs to automatically mount the usb devices when they are accessed, and unmount them when they're no longer being used. So after installing the autofs package, I added the following line to /etc/auto.master:
/var/autofs/removable /etc/auto.removable --timeout=2

Update (8/12/06): I fixed the rules to use the proper equality test, == rather than =, which newer versions of udev require. Thanks to Andrew Schulman for pointing this out.

What The Hell Is Wrong With Google Analytics?

Google Analytics, their new hosted web stats application based on Urchin, seems to be completely broken. Every time I log in, I get the following message.

The problem is that I added the Google javascript to my site three days ago. I want my pretty graphs, damn it.

Such a script looks fairly innocuous. The problem is that sender variable sent from the client is not sanitized. By manipulating the value sent in the sender variable, a malicous spammer could cause this script to send messages to anyone.

Here's an example of how such an attack might be carried out.

Now, in addition to being sent to info@example.com, the message will also be sent to victim@example.com.

The solution to this problem is to either not set extra headers when using mail(), or to sanitize all data being sent in these headers. A simple example would be to strip out all whitespace from the sender's address.

A more sophisticated approach might be to use PEAR's Mail_RFC822::parseAddressList() to validate the address.

Tim, over at The Mess That Greenspan Made (my favorite economics blog by a non-economist), has compiled a good summary of the responses surrounding the Fed's notice that they're going to stop reporting M3.

Perhaps you should wonder why even U.S. based contractors are being paid with suitcases of $100 bills, when they would prefer the payments be made by direct deposit to their U.S. account.

Hey Sunny, I was hanging out at one of your stores today, the one at Devonshire and Reseda in Northridge. You really need to get your franchisees to get their shops in order. While overall, you guys make good coffee, much too often, I get a terrible one. It's quite a crapshoot to get a coffee at one of your stores. There's simply no consistency in the coffees made at The Coffee Bean. While on a good day, your lattes are quite delicious, I'd estimate that about 10% of the time, I get a terrible coffee. Part of problem seems to be under-trained staff. Different baristas in the same store often make coffees differently. The first iced latte that I sent back today was clearly disproportioned, lacking the nice milky tone; it looked like coffee-water. Nonetheless, I drank some of the bitter swill and added some more milk. Alas, it still tasted quite bad. I had the latte remade, and while the second looked right, it still tasted poorly. Hoping that perhaps someone spilled some dish water into the ice maker, I had it replaced with a hot latte. Unfortunately, the hot one was not much better. I did burn my tongue a bit on it which helped keep my taste buds from revolting. I suggest that you visit the shops and make sure that they're cleaning out the espresso machines regularly. Or perhaps they are using low-grade coffee beans in order to widen the narrow profit margins on $3 cups of coffee. Please let me know what your research turns up and when it's safe to return to Coffee Bean stores. Thanks, Christian

My high school reunion last night was a bit disappointing. There were a handful of old classmates that I remember, but most of good friends from yesteryear didn't show up. 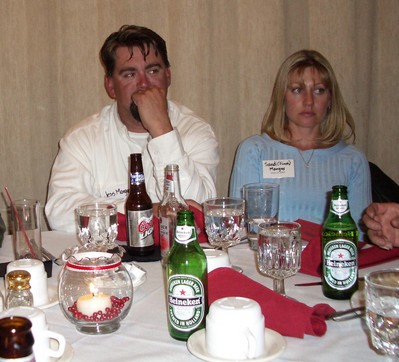 There were a number of law enforcement officers and teachers in attendance. There were also a surprising number of people still living in Rosamond.

I did get contact info for a bunch of people, so I'll try to get in touch with some of the people who didn't show up. That means you: Lee, Ian, Malia, Elsie, Josh, Chris. (I hope nobody else is insulted by my poor memory.)

EU to Print Its Way Out of Inflation?

The EUobserver reports that members of the European Parliament are proposing to print €1 and €2 notes to replace one and two euro coins. They argue that the public doesn't correctly value the coins, and thus, a switch to notes will curb inflation as consumers stop throwing the coins around frivolously. Yeah, that's the cause of inflation. It can't have anything to do with those responsible for actually printing (or minting) the euros or the banks that create money out of thin air.

If the EU wants to get rid of their coins, I'll be happy to exchange each €1 coin for a $1 Federal Reserve Note. Limited Time Offer. While Supplies Last.

Perhaps the US should eliminate the $1 note and make the $2 note the smallest. The latter tends to be overvalued by American consumers.