There's a Jiffy Lube around the corner from my apartment. Sometimes when I walk to lunch in the afternoon, the mechanics are standing outside on the street with signs advertising their oil change service to passing cars. I think that's a good idea; rather than just hanging out waiting for customers, they're out touting.

But I didn't realize something even more interesting about their sales technique until yesterday. A few days ago, I pulled into the Jiffy Lube to ask how much an oil change was; it was $29.95 or $29.99. That seemed a bit expensive so I passed.

Yesterday, while I was walking home from Starbuck's after enjoying my free latte from Insider Pages, I read the signs that the mechanics were holding. They read:
Right Now
$19.95
Oil Change

When they don't have any customers, they cut the price by $10 bucks. That seems pretty smart. Other companies might want to try that. What other errands would you take care of at the vendor's convenience for a hefty discount?

I was at Chicago For Ribs last week with Denisa. It was about 2 or 3 in the afternoon, and there were 4 or 5 tables of customers. On staff were two servers and a bus boy. I wouldn't have thought anything of it, but Denisa pointed out that the management should send home the bus boy and one of the waiters. She briefly worked in the Chicago For Ribs in Santa Monica. That one was always over-staffed, and closed a few months after opening. (They also had a problem in that they gave away buy-one-get-one-free certificates on Third Street Promenade every day so every customer came in with a coupon.)

If they didn't want to send some of the extra staff home, why not have them stand outside with a sign advertising a Full Rack of Baby Backs for $10 Right Now?

Find a Doctor or Mechanic at Insider Pages

I'm becoming a big fan of Insider Pages. I've used to find a mechanic and dentist this week. It's still a new service, so there aren't a ton of reviews yet, but they're off to a good start. I don't think they have too much of the smarts built in yet, e.g. the opinions of people with those similar to mine should be weighted higher, at least for things like restaurants and bars, but there doesn't seem to be any spam yet, at least.

Since they're still in the early stages and the network effect hasn't taken hold yet, they have a promotion in which you will receive a $5 Startbucks card after writing 5 reviews.

They also provide a wordpress plugin which allows cross-posting on your blog and Insider Pages. 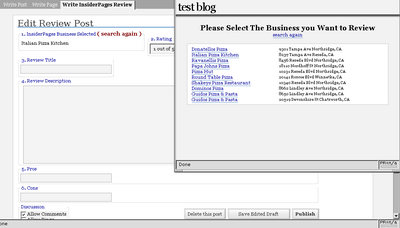 Some researchers in France figured out why, when a piece of spaghetti is bent, it breaks into multiple pieces, rather than just breaking in half. They have a number of videos of their experiments. They found that even releasing one end of a bent piece of spaghetti can cause it to break.

The multiple breaking of bent rods, like dry spaghetti pasta, can then be understood as a cascade of releases (loss of cohesion upon breakings) followed by stress increases leading to new cracks.

Barry at The Big Picture points out another popular housing bubble t-shirt, a parody of Mr. Bubble.

Barry thinks that the fact that because there are declarations of the bubble everywhere, that it is must not be a bubble.

I find that somewhat ironic -- the same people who missed the largest stock bubble in human history have now become expert in spotting bubbles. And they now are spotting bubbles everywhere.
…
I cannot quite put my finger on precisely why the entire world declaring a housing bubble exists makes it less likely to be so at the moment.

I think, because so many people lost their shirts in the nasdaq bubble just a few years ago, it makes sense that many would be able to recognize the housing/credit bubble. I find it remarkable that so many people have been party to the current bubble. It's not like previous bubbles where there have been multiple generations between bubbles, causing the lessons of the past to be forgotten. There must be a propensity among people to assume that if the banker wants to give them a loan for 10 times their income, it must be in their best interest.

Plazes is pretty cool new service that tracks your physical location based on the MAC address of your default gateway. The idea is that when you connect to a network, a litle program on your computer called a launcher checks your default route, looks up its MAC address in your arp cache (doing something like
netstat -rn | grep '^0\.0\.0\.0' | awk '{print $2}' | xargs /usr/sbin/arp | tail -1 | awk '{print $3}'), and sends it to Plazes.

If it's a MAC address that Plazes doesn't know about yet, it lets you put in a name for the location and an address. Then you can share your location, perhaps by integrating it into an IM client or on your blog.

You can also look up the location of a Plaze user using a url such as http://beta.plazes.com/whereis/xn, and you can look for people within a certain radius of your location.

Note that if you're using the GTK launcher on Debian, it expects to find arp in /sbin.

In response to Kansas becoming the latest state wanting to teach "Intelligent Design" in a science classroom, one of Denisa's professors, Robert Cleve, suggested that doing so is akin to splitting a physics class in two, and teaching magic during the second half. I thought that was a clever and apt analogy.