Jonathan, over at MyMoneyBlog, has a couple posts up about car insurance. His most recent is about collision and comprehensive. I dropped these on my 1999 Honda Civic a couple weeks ago. I'm saving $750 a year without it, and it wouldn't cause too much of financial burden if the car were involved in an accident. 21st Century fixed their web site so I was able to change my coverage without talking to Patrick. We dropped it on Denisa's car, which is only worth maybe $3k, a long time ago.

Jonathan's earlier post on liability coverage is interesting to me too. Since I started driving, I've always had the minimum liability coverage required by law. Since I didn't have many assets for someone to come after, this was fine. As I start to build up my net worth, I should definitely increase the amount of my bodily injury and property damage coverage.

It pays to get married young. From my experience, wedding gifts tend to not keep pace with inflation. My friends, Gina and Kat, recently got married. Since they've been living together for a while, they don't really need kitchenware and linens; so, instead, they asked for cash to help pay for their honeymoon. I don't really like the idea of giving cash as a gift. We wanted to give them a gift certificate that they could use while on their honeymoon, which would show at least some thought went into the gift. But we started a bit late in the search for an appropriate venue from which to purchase a gift certificate, and didn't find anything that we were sure that they would appreciate, so we ended up just giving them cash.

I think the standard wedding gift price is $100. To me, this amount is neither too rich nor too poor. But this is the same amount that I've been giving since 1998 when my friends started getting married. (If you've received a wedding gift valued at less than $100 from me, sorry, I might have been low on funds at the time. Sometimes people don't design their gift registry to optimize the gift value per gift-giver. I wouldn't want to give a $70 frying pan with three washclothes, for example. When picking out items for a gift registry, one should come up with appropriate bundles of items that come close to $100 in value. That said, I've never set up a gift registry. I think it's more tacky than asking for cash. The last time I went through a catalog listing things I wanted someone to buy me was when I listed just about every toy on the market for Christmas, 1984.)

My point was that, in terms of gifts received, you would have been better off getting married in 1998 than in 2005. Unless, of course, you asked for computer hardware or consumer electronics for your wedding, in which case a dollar goes a lot further today. This observation isn't solely based on my generosity (or cheapness) in gift giving. About a year after Denisa and I got married, we had a reception in Slovakia so we could share the joy of our matrimony with her family and friends; and so the Krizan (Denisa's maiden name) family could get a return on the investments they made in the marriages of various cousins. The investments turned out to not be very profitible in real terms though. It seems SKK 5000 is the standard Slovak wedding gift from family members. (This was about $100 when Denisa and I met, but due to the falling dollar was closer to $200 when we got it.) But this is the same amount as Denisa's parents gave the cousins 10 years earlier. Slovakia had double digit inflation for a while which means 5000 Sk isn't nearly what it used to be. While wedding gifts aren't being devalued quite as quickly in the US (unless you're planning an international honeymoon), you're better off getting married sooner rather than later.

What should those considering marriage and those considering attending a marriage keep in mind for the future? If inflation stays low, there's not likely to be a revaluation of the wedding gift anytime soon. A few people might bump up their gifts to be $100 plus tax, but the next big gift amount is probably not until $200. If inflation picks up, gifting might move up to this level ahead of inflation. Those looking to get married would probably be better off during a recessionary period though. It is unlikely that there is much downside in the gift level so a fall in consumer prices would increase their gift values in real terms. Alternatively, a stronger dollar may increase the amount of linens from China that a dollar purchases (and prevent an undergarment war).

How To Make An Awesome Smoothie

It's starting to get hot here in the Valley. And when it's hot, I like to drink smoothies. Here's my recipe for a smoothie that tastes great and is good for you. It doesn't have any sugery "juice drink concentrate" in it, just juice and fruit.

I'm just starting to learn Python. The only thing I'd written in Python previously is a script to remove large attachments in email messages and store them in a database, replacing them with a link in the message to retrieve the attachment over http. This task was made much simpler than it would have been in other languages because of the Python email module. I'm very impressed with the large library of Python classes available.

After my experiment in packaging JavaHMO, I decided to try to package iPodder. The results are encouraging. I haven't figured out how to use all of the debhelper tools yet, but dpkg -b seems to do the job adequately well while I'm learning.

The iPodder package is in my repository, which you can add to your sources.list:
deb http://packages.pinkhamster.net/ unstable main
Since wxWidgets 2.5.3 appears to have been removed from sid, I've copied it from snapshot.debian.net into my repository to satisfy iPodder's dependencies.

JavaHMO is an application that allows you to use the Tivo Home Media Option to access music and photos stored on your Java-supported computer (Linux is a good choice) via your Tivo. I previously created a Debian init script for JavaHMO. Dave posted a comment on that page saying that he was having problems getting JavaHMO to start. It looks like the init script doesn't work with newer version of JavaHMO.

So I've started working on a more proper Debian package for JavaHMO. Rather than simply using alien to convert the RPM, I've tried to make it more of a proper Debian package. I've removed all the capital letters from directory and file names, so the config directory is /etc/javahmo rather than /etc/javaHMO, for example. It also creates the javahmo user and sets up the init script links.

I'm quite new to Debian packaging, and I haven't made it through the whole Policy Manual yet. Suggestions for improvements to the package are welcome.

You'll need to have a JVM installed. I recommend using make-jpkg with Sun's JRE.

Add the following line to /etc/apt/sources.list:
deb http://packages.pinkhamster.net/ unstable main
and run apt-get install javahmo. The JavaHMO configuration file, /etc/javahmo/configure.xml, is writable by group javahmo. Add any users who should be able to configure JavaHMO to this group. Run jhmo gui to start up the gui configuration tool and enable the plugins that you would like to use.

I don't actually know the circumstances leading to conception, but I am now an uncle. At one week, Klarka is starting to become a cute little thing. 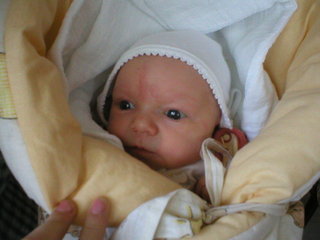 Her eyes are huge!

I don't know much about art. In fact, the only artist whose work I can think of that I like is Salvadore Dalí. (I quite enjoyed visiting the Dalí Museum in Florida five years ago.)

I stumbled across Carrie Graber's work while checking out the web site for Scala Editions, who recently became a Postica customer. I was immediately taken with her paintings. I don't know what the appropriate terms are when discussing art, but I quite like her use of lighting. The pictures with people, mostly women, convey a sense of anticipation; it's like they are scenes from movies I'd like to see.

Salon recently published an interview with evolutionary biologist Richard Dawkins who has written a number of books explaining evolution. I hadn't heard of Dawkins until a few months ago when I saw him on NOW with Bill Moyers. I've been meaning to pick up one of his books.
Some choice quotes from the interview:

For a long time it seemed clear to just about everybody that the beauty and elegance of the world seemed to be prima facie evidence for a divine creator. But the philosopher David Hume already realized three centuries ago that this was a bad argument. It leads to an infinite regression. You can't statistically explain improbable things like living creatures by saying that they must have been designed because you're still left to explain the designer, who must be, if anything, an even more statistically improbable and elegant thing. Design can never be an ultimate explanation for anything. It can only be a proximate explanation. A plane or a car is explained by a designer but that's because the designer himself, the engineer, is explained by natural selection.

You are working on a new book tentatively called "The God Delusion." Can you explain it?

A delusion is something that people believe in despite a total lack of evidence. Religion is scarcely distinguishable from childhood delusions like the "imaginary friend" and the bogeyman under the bed. Unfortunately, the God delusion possesses adults, and not just a minority of unfortunates in an asylum. The word "delusion" also carries negative connotations, and religion has plenty of those.