Adam Langley noticed that Adobe Reader 7 is now available for Linux. The update from version 5 has been long overdue. The new version uses GDK rather than Motif. It has some new features such as Save As Text, and will hopefully eliminate those annoying warnings about a PDF requiring a newer version of Acrobat Reader (though they always seem to be perfectly readable). Multiple PDFs are now opened within a single application window. 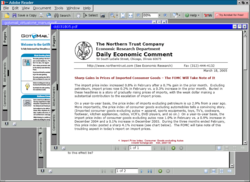 Here are some Debian packages I built based on Christian Marillat's packages. I'm sure he'll do a better job soon.

Update: Christian Marillat has added acroread packages to his testing and unstable repositories. You probably want to use those.