Calculated Risk points us to I ♥ The Housing Bubble t-shirts.

I decided to contribute my own. 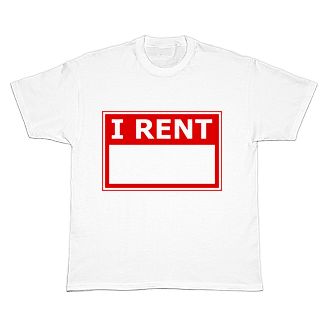 A Rare Sight Captured on Film

On page 27 of the September 25, 2004 U.S. edition of Time magazine appears a picture of the President of the United States, George W. Bush, in which he does not appear to be an idiot.

My friend, Mike, is getting married later this year. I receive a "save the date" notice last week, followed by a second notice with a correction to the wedding's website.

I really don't understand the point of these notices. In order to send a save-the-date notificiation, you must already know when the wedding is, and if you know when the wedding is going to be, you almost certainly know where it's going to be held, especially if you're the type inclined to send out such notices. Furthermore, you know who you're going to be inviting because you wouldn't send a save-the-date notice to somebody who you aren't inviting. So, if you know all the critical details, why not just send out the invitations?

My hypothesis is that some couple actually had a legitimite need to send out such notices, such as an impending wedding date without a confirmed location. But some bachelorette received received one of these notices and decided her wedding had to have at least everything that her disorganized friend's did. And at some point, the stationer or wedding planner added save-the-dates to the checklist, and we'll be forever subject to such silliness until there is a cure to bridal irrationality syndrome.

Here's the video Fred Goss created to sell NBC/Universal on the idea of an improvised sitcom, which eventually turned into Sons & Daughters, the funniest show since Seinfeld, which was recently canceled after airing 10 episodes.

Fred has a blog on MySpace. He's considering doing an internet-distributed show, but it probably won't be Sons & Daughters because it'll probably be hard to scale down from the current 80-person crew/$700k-$1M per episode budget. Whatever he ends up doing, I'm sure it'll be hilarious.

Max Clark points out that American, both the ones who run the government and the ones that run the PTA, are prone to short-term thinking.

If you have paid any attention to the news lately you should be aware that the Republican controlled Senate is discussing changing Senate rules to eliminate the filibuster.
...
What are they planning to do when the Democrats are back in power? And here is where short sidedness takes over. The answer is nobody cares. Why? Because by the time it happens it won?t be their problem.

He points out that a similar short-sightedness is plaguing those buying homes with ARMs and interest-only loans at a time when long-term interest rates are at historical lows.

Maybe they think the end of the world is near, so what the hell.

In Italy, "abuse of popular credulity" is a crime. A case has been brought against a Catholic priest for claiming that Jesus Christ was an actual person, and the judge has ordered the priest to appear in court to prove his claim.

I don't know how courts work in Italy, but in the US, witnesses are asked to swear on the Bible. Doesn't doing so assume that the text within is factual? I don't think they let you bring in your own books

We were rear-ended in a hit-and-run last night. The driver was apparently drunk. He hit us while we were driving about 35 mph on Washington Blvd in Culver City. We pulled over to the side of the road, and he floored it and took off. I then sped up to get his license plate number. We didn't have to pursue him for very long: he slammed into a parked car a few hundred meters from where he hit us, and we pulled over about 30 feet behind him.

I called the police, and while on hold, the driver got out of his car, and started walking towards us. Not wanting to confront a potentially violent drunk, I pulled in front of him. He got back in in his truck and sped off again.

The police arrived about 10 minutes later to take a report. Since there wasn't any damage to our car other than a little scratched paint and no injuries, the police officer asked if we really wanted to file a report. I wanted to make sure that we filed an official report in case we were needed as witnesses in the event of a subsequent vehicular manslaughter or something. If this guy didn't kill anybody last night, he got very lucky. Leaving the scene of an accident is also a crime, but unfortunately, he probably won't be prosecuted.

Overall, we were lucky not to have been hurt. I just hope the police can get this idiot off the road.

Barry at The Big Picture points out another popular housing bubble t-shirt, a parody of Mr. Bubble.

Barry thinks that the fact that because there are declarations of the bubble everywhere, that it is must not be a bubble.

I find that somewhat ironic -- the same people who missed the largest stock bubble in human history have now become expert in spotting bubbles. And they now are spotting bubbles everywhere.
…
I cannot quite put my finger on precisely why the entire world declaring a housing bubble exists makes it less likely to be so at the moment.

I think, because so many people lost their shirts in the nasdaq bubble just a few years ago, it makes sense that many would be able to recognize the housing/credit bubble. I find it remarkable that so many people have been party to the current bubble. It's not like previous bubbles where there have been multiple generations between bubbles, causing the lessons of the past to be forgotten. There must be a propensity among people to assume that if the banker wants to give them a loan for 10 times their income, it must be in their best interest.

In response to Kansas becoming the latest state wanting to teach "Intelligent Design" in a science classroom, one of Denisa's professors, Robert Cleve, suggested that doing so is akin to splitting a physics class in two, and teaching magic during the second half. I thought that was a clever and apt analogy.

According to the Chicago Sun-Times (via Max Clark), Congress is planning to add two months to Daylight Saving Time.

"The more daylight we have, the less electricity we use,'' said U.S. Rep. Ed Markey (D-Mass.), who co-sponsored the measure with U.S. Rep. Fred Upton (R-Mich.).

Shifting daylight from the morning to the evening doesn't create more of it. See Wikipedia for more details on DST.