The smart folks at Northern Trust publish daily economic reports that are short, informative, and full of interesting graphs.

From a recent report on the illusory nature of the recent growth in household net worth:

The rise in household net worth in recent years has largely resulted from inflating prices of corporate equities in the late 1990s, and residential real estate in the past four years. But this rise in household wealth is illusory. The true measure of an increase in the wealth of a nation is the growth in its capital stock. In recent years, growth in our capital stock has slowed and the composition of the slower growth has moved in favor of McMansions and SUVs, which do little to increase the productive capacity of our economy.

From a report titled Investment Implications of the Inevitable Rebalancing of the U.S. Economy or Making Lemonade Out of Lemons, here's a chart of the residential real estate "P/E" ratios, i.e. the ratio of market value to rental rates. 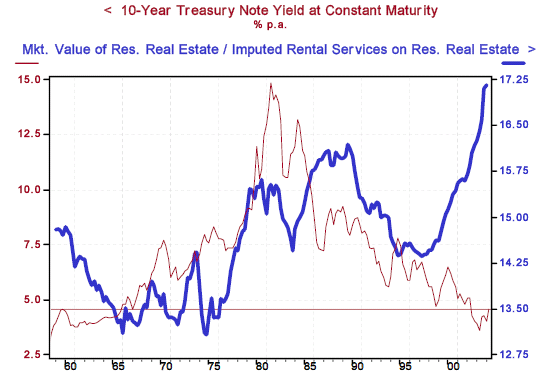 I've setup an RSS feed of their reports so I can read new ones as soon as they're released. It tracks their daily and weekly reports, as well as their economic outlook forecasts which are published monthly.

Update (11/09/2008): I've redirected northerntrust.rss to a Yahoo Pipe that aggregates Northern Trust's own RSS feeds. It does not include their press releases, however.