I recently read The Goal, a business novel that introduces the Theory of Constraints as a toolset for managing a business in order to "more money now and in the future". One of the criticisms the book makes of the way businesses are often run is that their use of cost accounting to guide decisions fails to maximize the amount of money the business can make. An alternative called throughput accounting is proposed, but after having completed The Goal, I didn't have a clear understanding of how and why cost accounting fails. 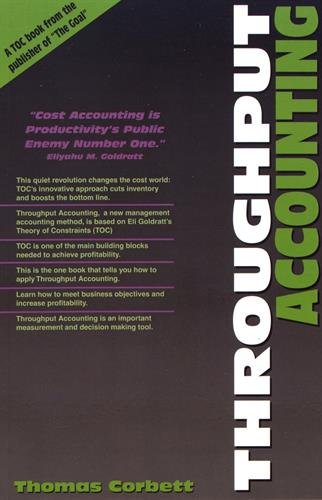 So I bought Throughput Accounting to dig in deeper. The book starts with a great example of a simple decision made using cost accounting.

A factory makes mens and womens shirts. To make a shirt, you need some raw materials, plus the labor to cut fabric and sew fabric.

Since womens shirts bring in more revenue, have a higher gross margin, and require less labor, it seems like a reasonable answer is to produce 120 womens shirts, and then as many mens shirts as we can with the remaining time we have available.

Throughput Accounting then explains how to calculate the amount of money (throughput) being made on the constrained resource per minute, the sewing machine, to decide how many of each product to make. But I'm going to MiniZinc to use a contrained optimization solver to maximize net profit, which will give us the same result.

The constraints above, and the goal of trying to maximize net profit, can be translated into a MiniZinc model as follows (this would be done in a more concise manner if there were many products):

And solving the model tells us that we should produce 120 mens shirts and 80 womens shirts for a net profit of $300, rather than a loss.

Intuitively, what's going wrong in the cost accounting solution is that we're lumping together all of the labor and not taking into consideration that the sewing machine is our bottleneck, and that we need to maximize the amount of value we're getting out of the bottleneck. Nonetheless, I struggled to translate this mistake into a MiniZinc model that also gave the wrong answer.

Below is an incorrectly defined constrained optimization model that I think reflects where we go wrong when trying to use cost accounting for decision making. The goal is changed from maximizing net profit to minimizing cost. But we don't want to just minimize cost; we could do that by producing zero shirts. We also want to produce as many shirts as we can. I modelled this as a constraint that says that producing one more mens shirt or one more womens shirt should cause us to exceed our cutting or sewing constraints.

Solving this model gives us the original cost accounting result.