ChangeThis, the publisher of cool little "manifestos", has gotten lazy with their latest batch. ChangeThis manifestos are digital pamphlets that focus on one specific topic. They usually short enough to read in one sitting, but packed with more information than you can fit on PowerPoint slides (not that I encourage the use of PowerPoint). The format is similar to slides, but they are designed to look good both on the screen and printed out. What makes them special is the thought that has gone into the design, making them difficult to avoid reading once you have opened one up. The content is generally a call to action or the author's insight into their particular area of expertise.

For example, they've taken a number of Joel Spolsky's essays (which are already compelling reading) and formatted them as manifestos.

This week, they've released two manifestos which, as they'd say on Sesame Street, are not like the others. The first, Shhh!, contains little cards that can be printed out and given to annoying strangers talking on cell phones. The design is clean, and the idea is cute, if somewhat tired. It doesn't follow ChangeThis philosophy, though. There's no individual behind it and it's not presenting much of an idea other than not to be rude on one's cell phone.

The second misfit is called Two Tomatoes, and actually is some kind of manifesto telling consumers what kind of tomatoes to buy, I guess. I'm not really sure what the content is because it's not readable on my screen. Except for the cover page, it doesn't look like anything else that ChangeThis has released.

Here's a typical page from a manifesto: 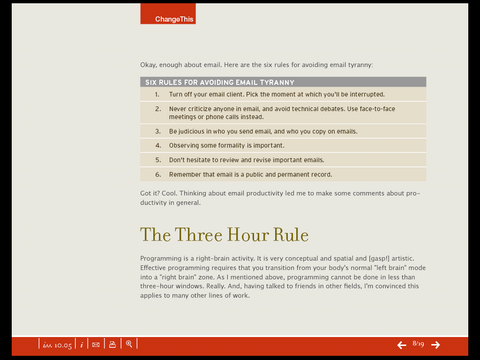 And here's the tomato one. 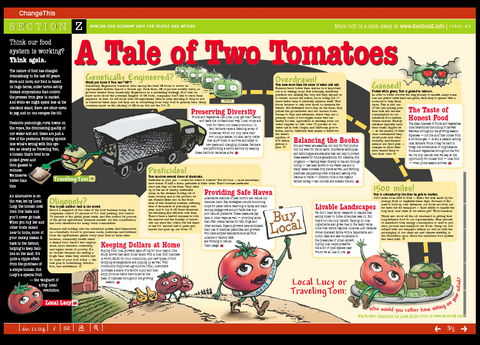 In Bubble Wrap is an advertising program run by 800ceoread in which you can win free business stuff, mostly books, every day. Thanks go to Seth for the head's up.

In other free book news, I have Paul to thank for a free copy of The Number. I haven't finished reading it yet, but so far it's pretty good. The Number

, by Lee Eisenberg, is about the amount of money you need to retire, and discusses the ways different people think about the Number. The book is targeted to those in their 40s and 50s getting closer to retirement who, for a variety of reasons that Eisenberg investigates, don't know what their Number is, but it's a worthwhile read for those of us pushing 30.

Its discussion of retirement being a rather new concept is pretty interesting. One hundred years ago, most people worked until they died. Then, people started to live longer, get kicked out of their jobs, and die in poverty. Then came Social Security. Next up, long lives requiring savings somewhere north of -1.5% during the productive years.